Well, yes, there are. I know that this will come as a shock to many collectors of these cards, but it would seem that packets – but not parts thereof – could be traded-up for team cards and a medal/badge. However, as of 2020 none of these cards have ever been seen – they must be out there somewhere, and someone will probably have several of them but not actually realise what they have got.

What evidence is there? Well once again I am indebted to Matt Stevens who has supplied the following inserts (enlarged here for clarity) from ‘Clips’ cigarette packets of the day. The first is a folded insert which advertises a ‘medal’ of Blackburn Rovers and England captain, Robert “Bob” Crompton in exchange for twenty empty packets. The inside of the insert makes this plain. You will also notice the reference to the team cards… 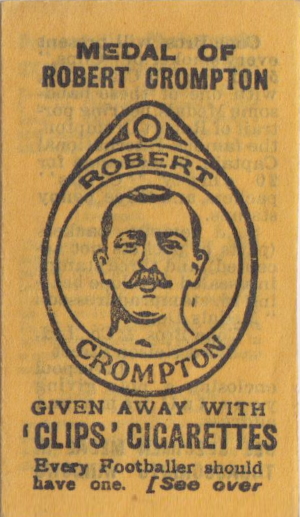 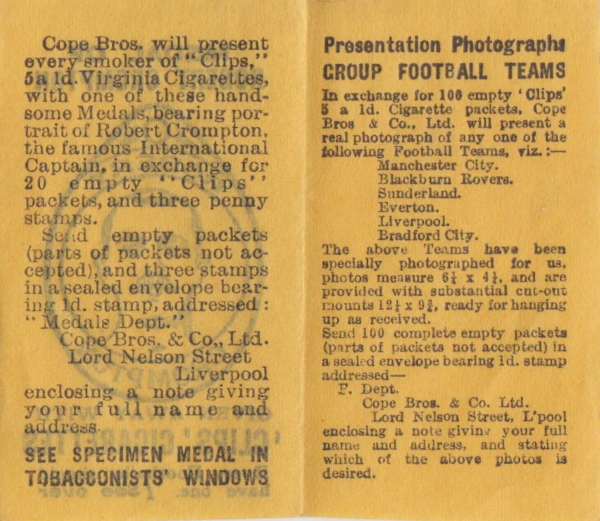 The “Group Football Teams” were available in exchange for one hundred empty packets; again, no parts of packets were acceptable, they had to be complete. The six teams on offer were:

I have no idea why those six teams were chosen, but they must have been considered local – Liverpool & Everton – or prominent; the aforementioned Bob Crompton was Blackburn Rovers and England captain, whilst Bradford City were the FA Cup winners in 1911 so that might help to date the offer.

There was also a single sided insert available which advertised the “Group Football Teams” cards which used a slightly different typeface but nevertheless offered the same deal for the same cards, viz:

The cards themselves were almost certainly plain-backed otherwise they would have been identified by now. They seem to have measured 6¼ by 4¼ inches and came in mounts measuring 12¼ by 8¾ inches, although it’s doubtful that any of these mounts themselves would have survived.

So now it’s over to you to check and let me know; do you have any of these rare cards? Please don’t hesitate to get in touch if you do and we’ll try to get some pictures up here. 👍

“I respect the privacy of your data and will never pass on your email address or any other details to third parties unless specifically requested by yourself.”